Are You a Bartender, a Mixologist or a Flair Bartender?

Taken from our friends at Diffordsguide.com, Tom Dyer tackles that touchy subject that’s been going around lately; are you a bartender, mixologist or flair bartender? Well, it’s about time someone goes on record:

There has long been a divide between mixology and flair bartending and I’d like to set a few things straight. Because I can already tell you that there are no mixologists or flair bartenders. They are just different styles used by bartenders. If you look at what both styles stand for, and what they are, then you’ll realize every bartender uses both flair and mixology.

The word flair comes from “showing off”. I’m not saying that we are all showoffs, but, we all have a certain amount of pride when we are working behind our bars. Don’t forget there are two types of flair. Exhibition flair and working flair. One is for competitions and the other is for your everyday shift behind the bar. 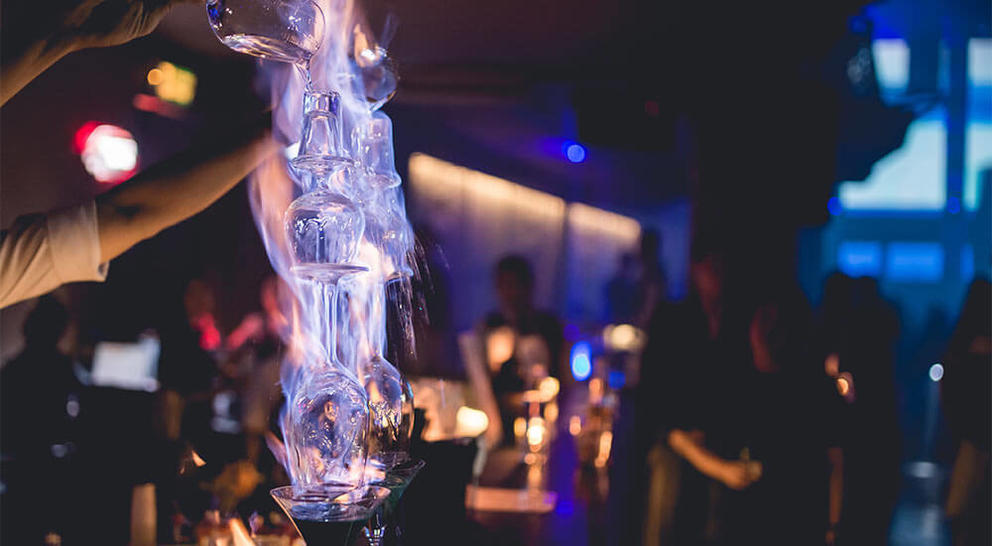 Just because you are not throwing 3 bottles around, you are, however, pouring in your own stylish way, using your utensils in a specific way, or handling money and dealing with guests using your own little details. These are all types of flair.

Let’s not forget Jerry “The Professor” Thomas, probably the most famous bartender to have lived, was a flair bartender. He went around the states making his signature cocktail the Blue Blazer, ‘performing’ it and entertaining his guests whilst doing so. That is a type of flair, possibly making him one of the first flair bartenders in the world.

Now, I know some of you will be saying, “yeah, but flair bartenders can’t make a drink”. Of course, there are some people out there like that. They juggle away, showing off to their guests, making bad drinks and giving bad service. But you can potentially say the same thing about mixologists.
Note editor: None of these guys would make it past EBS certification.

I recently posted the following questions on social media: “What is a mixologist?” and “What is a flair bartender?” and both questions turned up some interesting answers.

The best answer, in my opinion, was from Pepe Dioni, the Spanish President for the Association for the IBA, who, when answering “what is a flair bartender?” simply answered; “A Bartender”.

When I asked ‘what is a mixologist?’, a lot of people replied that it was a term used to gain more money, something coined by the media, but essentially a label or fancy term for a bartender. This thought seemed only to apply to the term mixologist rather than flair. Which made me question why? Flair bartenders and mixologists are still just bartenders. Is it because the term “flair bartender” already has the word bartender in it?

In the end, most people seem to believe that there is no divide between mixology and flair. In fact, there are no mixologists or flair bartenders, just bartenders. The labels were mostly given by the media, plus some bartenders gave themselves a title to inflate their importance. Fairplay, as it does make them sound more important or highly skilled, potentially translating into getting paid more. But why should we, as bartenders, be labelling ourselves as anything other than bartenders?

Peter Oosthuizen said it well; “If you are a doctor, per se, you will either be a general practitioner or a specialist. Either way, it still boils down to you being a doctor.”

To me, this is a great way of saying we are all bartenders, but we specialize in different aspects of bartending.

Or Angus Winchester; “I have no problem with people calling themselves anything to get paid more or laid more, but I do have a problem when people say they are a mixologist/cocktailian/drinksmith/bar chef and not a bartender… Rather like flair, ‘mixology’ (the ability to mix complicated cocktails) is merely a facet of bartending (serving alcoholic drinks to paying customers). If you call yourself a ‘mixologist’ then you will be out of luck if people stop drinking cocktails…I think flair bartenders are often some of the most professional and dedicated bartenders I know, but again if they put too much emphasis on the flair and not the bartending, they too fall into the same trap as mixologists, plus if they choose to do exhibition flair while making drinks then they let their ego take over”

I couldn’t agree more with all these statements. Looking back at all those times I asked flair bartenders what they do for a living, the Majority of them said, they are bartenders. Quickly followed by an explanation, that they specialize in a certain aspect of bartending; flair. This is actually a conversation I have had myself on several occasions as well.

In most countries around the world the bartending profession is still perceived as “that job you do when you’re in college”, or in-between jobs. So the more we label ourselves as, flair bartenders, mixologists, liquid chefs or bar chef, we are getting away from what we really are. At the same time we’re putting down the bar-tender profession ourselves, by trying to be something more established.
So let’s stop fueling that misconception and bring it back to the basics. Ask yourself the one question below. If your answer is anything other than bartender, then you really need to rethink why you are in this profession.

When you fill out an application form, identity form or landing card, and it says “what is your profession”; what do you usually write down?